One flight up and a world away, apartment 1B is the bright renovated sanctuary that you have been looking for. The striking renovation of this timeless 1 Bedroom apartment in the esteemed 24 Monroe Place pre-war cooperative updated the finishes to modern luxury standards while conserving the vintage detail Brooklyn Heights provides.

You can’t help but notice the original hardwood floors and classic moldings highlight the classic proportions of this old-school layout as soon as you open the front door. The dimensions of the living area and bedroom are so pleasing that there are numerous comfortable configurations possible for many lifestyles.

The fresh overhauled kitchen shines bright with stainless-steel Bosch appliances and quarts countertops. Custom cabinetry, built-in storage space and custom backsplash keep the space tasteful and clean as well as practical for everyday meal prep or impressive entertaining. The newly installed island not only doubles the counter space but it is also perfect for morning coffee or even a work call.

At over 18 feet long the living room has ample space for lounging, hosting, working, and dining. Eastern windows give great light to the antique parquet floors and the cedar-lined coat closet in the entry helps keep clutter to a minimum.

The bedroom has two large closets but it is spacious enough for all the dressers, and side-tables you might need in addition to a King-size bed. These golden-age layouts have not been changed in almost a century and they invite you in to find comfort, calm… a luxurious respite at the end of a busy day. 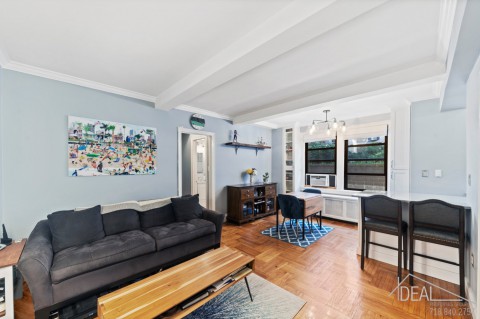 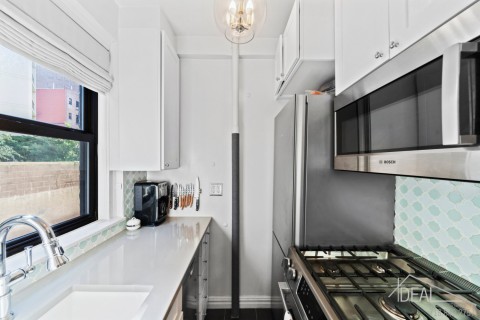