604 Sterling Place is an excellent opportunity to own a wonderful two family brownstone in Prime Crown Heights that would be a perfect fit for end users or investors alike. With approximately 2,250 sq ft of living space, this exceptional home is built on a generously sized 20ft x 131ft lot.


The first floor unit features hardwood flooring throughout the unit, and opens up to a large living space with a full bath and large bedroom to the front of the building. As you make your way across the living space there are two more bedrooms with the larger of the two containing a convenient master ensuite bathroom.


The second floor unit also features hardwood flooring throughout opening up to a generously sized living space and is currently configured as a four bedroom two bath with bedrooms split on opposite sides of the building - two in the front and two in the rear - with the larger bedroom in the rear also containing an ensuite bathroom.


Attractively located between Classon Ave And Franklin Ave, just two short blocks from the Franklin Ave Metro Station, Brooklyn Museum, Prospect Park and the Botanical gardens!! All of the best bars and restaurants that Franklin Ave and Washington Ave have to offer are right at your doorstep, and there are no shortage of activities to keep you entertained throughout your day.


Call or email for more details! 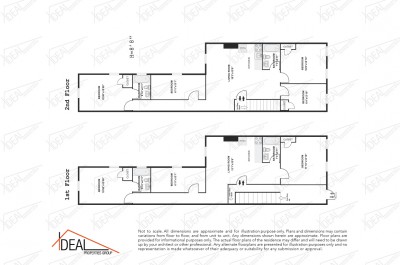 Thank you for logging in. Please reach out to your Ideal agent with any further questions.