Having welcomed first customers in the fall of 2008, Ideal Properties Group's Park Slope office paved the way to further expansion of the firm, and its sharpened focus on the brand that is Brooklyn.

Sitting on the corner of 7th Avenue and Berkeley Place in North Park Slope, Ideal’s office is ideally (pun intended) situated in the very heart of Brooklyn's most established and recognizable neighborhood. Highly trafficked, the 7th Avenue stretch of Park Slope is the premier, oldest corridor of retail and sundries in the neighborhood. With national chains like Chipotle, Bare Burger, Barnes & Noble and Five Guys lending the familiar, and the local mom and pop stores offering the unique, Park Slope’s diverse blend makes it a destination for all New Yorkers.

Ideal’s office has a distinctly modern feel, carefully curated within a historic envelope. Its design reflects the firm's commitment to transparency in the conduct of business – the commitment second only to ethics and professional integrity. The office has recently undergone a thorough renovation, doubling its size and making it one of the largest real estate offices in the area. Ideal’s Park Slope office is home to many of our longest tenured agents and brokers, guaranteeing our customers a superior service and a keen, fine-tuned knowledge of the market. 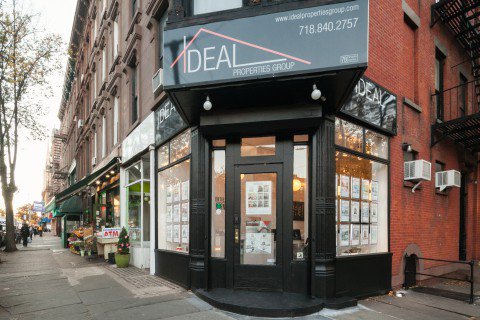