594 Marcy Avenue, #4B, Brooklyn, NY 11206 - Spacious One Bedroom Residence For Sale in Bedford-Stuyvesant

A modern approach to refined cosmopolitan living, 594 Marcy is a boutique collection of one-, two- and three-bedroom condominium homes in one of Brooklyn’s most legendary neighborhoods, Bedford-Stuyvesant. The newly constructed residences at 594 Marcy come either one or two per floor, gracefully blending the intimacy of home with private and communal outdoor spaces. Marcy Avenue residents are slated to enjoy a 15-year Tax Abatement.

This contemporary structure is distinguished by its forthright grey façade punctuated by the unmistakable warmth of ipe wood. At the confluence of Marcy and Vernon Avenues, 594 Marcy’s architectural harmony leads to the lobby where habitué and guest are welcomed with striking offset crown and base cove lighting intonating a gorgeous stained-cement feature wall.

Residence 4B is a sun-filled, west-facing, one bedroom, one bath home with a private balcony. Enjoy a large living and dining space open to the kitchen as well as a spacious bedroom with closet. The impeccably sourced kitchen features cabinetry imported by Richelieu offered in a combination of matte white and cypress wood that pair exquisitely with Stratus grey quartz countertops, Pearlized grey porcelain slab backsplashes and high-end stainless-steel appliance package by Blomberg, Fisher-Paykel, Liebherr, and Sharp.

The central heating and cooling, in-unit washer/dryer hookup, built-in Bluetooth sound system with Alexa Echo Dot, video intercom, and USB outlets throughout the home combine to create easy and modern living. Shared by all homeowners at 594 Marcy is access to the building’s roof deck with open views of north Brooklyn - sure to become a favored respite.

594 Marcy is located just one block south of Myrtle Avenue’s G train, connecting the borough’s popular neighborhoods, Queens, Manhattan and beyond. Also nearby, at Fulton Street, the A and C lines await, while the J, M and Z trains welcome the subway rider at Myrtle Avenue and Broadway. Citibike is just around the corner, for a quick and effortless ride through the tree-lined streets of charming one-of-a kind storefronts, restaurants, green spaces and historic Victorian brownstones.

Photos on this listing are of the model unit 2B, which is identical to unit 4B.
Square Footage includes interior (unit) and exterior (private balcony). 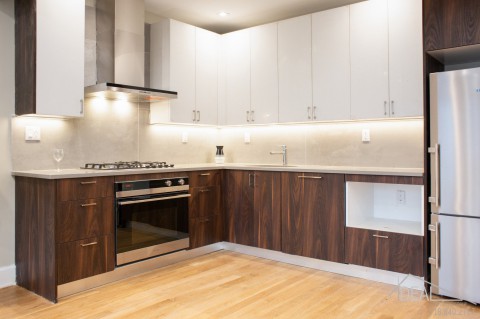 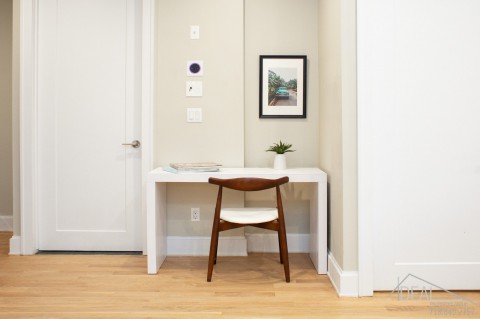